September 2022 Board of Director’s Recognition Dinner 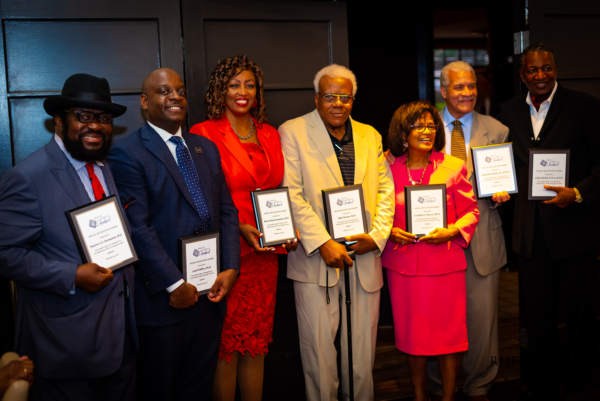 The formal part of the Health Legacy Awards Dinner involves the presentation of individual plaques to Board Members for their tremendous commitment to service. Throughout the 25 years of history of Health Legacy of Cleveland, a great deal of time has been spent thanking our external supporters and members of the broader community. We have spent less time thanking our talented board members, who have worked tirelessly behind the scenes to make sure that we continue to achieve our goals. Tonight, our spotlight will be on these individuals who have helped Health Legacy of Cleveland to make an important impact in the broader community.

“As President/ Chairperson of Health Legacy of Cleveland it gives me great pride to present our awards to our distinguished honorees this evening.”  These individuals have supported our organization and their peers. They also demonstrate a high level of commitment to Health Legacy and to the spirit of volunteerism. They are model citizens and true role models for our future leaders of America. 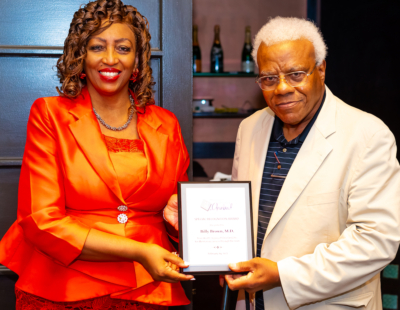 Dr. Brown is a very important awardee. He is one of the founding members of Health Legacy of Cleveland Inc. He is also the first President of Health Legacy of Cleveland. Like all board members, he has participated in many fundraising galas. He has worked with the Membership Committee for several years as well. He specializes in Internal Medicine. He has had a longstanding Medical Practice with Huron Road Hospital of over 30 years and more recently with the Cleveland Clinic. Online sources document that he provided over 45 years of service to Greater Cleveland.

He is the Past President of Health Legacy of Cleveland, Inc.He is wonderful fundraiser and a big supporter of Health Legacy of Cleveland Scholarships. Dr. Mickle has served as President of prestigious College of Diplomates of American Board of Endodontics. He has been selected by the Cleveland Magazine as one of Cleveland’s most “Interesting People” for his innovative clinical relaxation techniques to reduce root canal patients’ anxiety and perception of pain. Dr Mickle has served on the Board of Directors of the Greater Cleveland Dental Society of CWRU School of Dental Alumni Association. Additionally, he has served in the following roles: Past President of Ohio Association of Endodontists, Chairman of CWRU Dental Alumni Association, Program, (Case Western Reserve University). He is a member of Alpha Phi Alpha Fraternity. 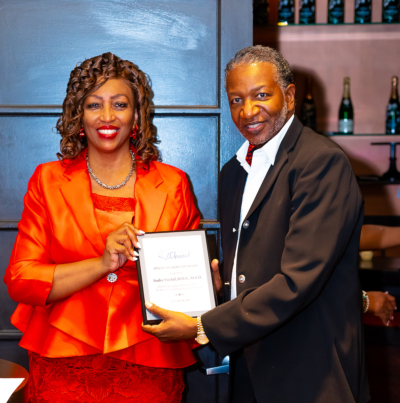 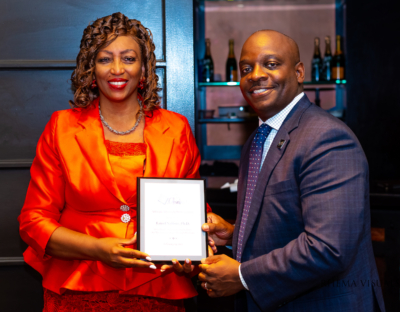 Dr. Lateef Saffore is the Immediate Past President of Health Legacy of Cleveland. He served as President during a time following a national and global decline where funds had to raise funds to stabilize Health Legacy of Cleveland by administering the sale of the HLC Art collection with Dr. Maposure Miller (also a founding Board Member). Dr. Saffore was very instrumental in using his leadership skills to ensure the continued support of our current and new president of Health Legacy of Cleveland, Dr. Bessie House-Soremekun. He served as the Lead Research Scientist at Lerner Research Institute from 2001-2006 and as Senior Scientist and Research Administrator for the Cleveland Clinic Foundation from 2001-2017. He is an Executive, Business Owner, Scientist, Inventor, Project Manager, and Critical thinker. He has worked with hospitals, federal agencies, and grassroots organizations to develop and implement important public policies. He is a Member of Alpha Phi Alpha Fraternity Inc.

He currently serves as the Treasurer of Health Legacy of Cleveland and he has been a member of the Board of Directors for many years. He is also a great parliamentarian for our organization. He won the Ohio Dental Association Leadership Pin award in 2018 for being active in councils and committees at all levels of the tripartite for many years, including having served as Chair of the Ohio Dental Association’s Council on Access to Care and Public Service, Credentials, Rules and Order Committee and the Subcommittee on Judicial Affairs, and as a member of the Ad interim Committee. Dr. Adams sets a powerful message to encourages others to take action. He has further been very active at The Historic Saint Andrew’s Episcopal Church in Cleveland, Ohio for many years where he serves as the Senior Warden. He is also a valued member of Alpha Phi Alpha Fraternity Inc. and the Reynards Social Group, (An organization of distinguished Black professional men). 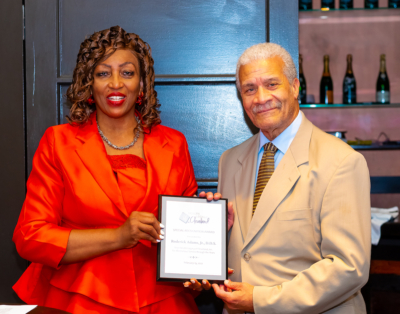 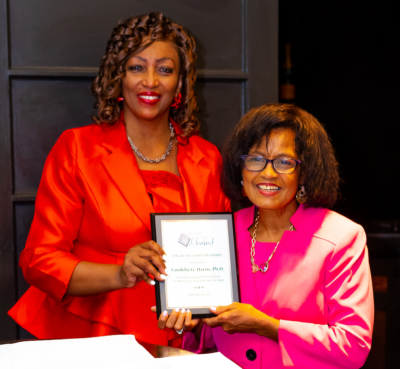 Dr. Cordelia G. Harris is the Vice-President/Assistant Chairperson of the Board of Directors of Health Legacy of Cleveland Inc. She has been an active member for over 25 years. Dr. Harris has provided leadership for our scholarship process, fundraising and Website. For the Cleveland Metropolitan School District. She is a former High School Principal, former Director of Health and Physical, a former Director of Human Resources and a Health and Physical Education Teacher. She enjoys continuing her affiliation with The Historic Saint Andrew’s Episcopal Church in Cleveland where she founded the Praise Dance Group. And now as a resident of Bowie, Maryland, she is an Altar Counselor for First Baptist Church of Glenarden. She is a member of Alpha Kappa Alpha Sorority Inc.

Dr. Maurice Soremekun has been a member of HLC for several years. He has generously supported our scholarship campaign through the years. He is a Board Certified Obstetrician/Gynecologist who is the President and CEO of Women’s Health Care, Inc., a facility dedicated to providing high quality health care services to women. He was the former Director of In-Patient Maternity Services, Director of Adolescent Obstetrics and Gynecology, and Chief of the Department of Obstetrics and Gynecology at Kaiser Permanente Medical Center of Cleveland, Ohio.He was formerly the Lead Physician at The Otis Moss Center of the University Hospital of Cleveland. He belongs to many professional organizations and has held many leadership Positions, which include serving as the President of the Cleveland Medical Association, the President of the Cleveland Society of Obstetrics and Gynecology, and the President of the Nigerian Community of Greater Cleveland on 2 separate occasions. He is a member of Trinity Methodist Church, is a Knight of John Wesley, one of the highest honors bestowed by the Methodist Church on its parishioners, and he is also a member of the Reynards Social Group. 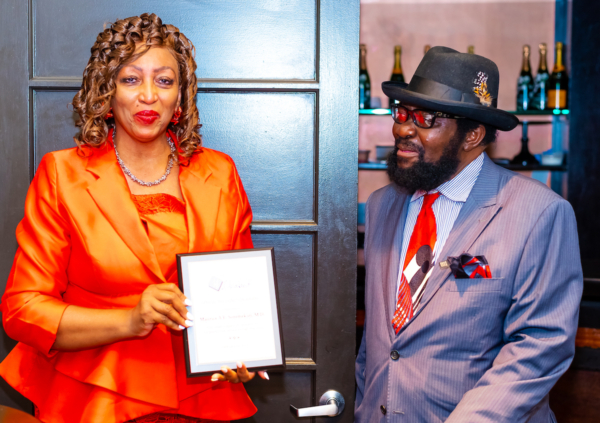 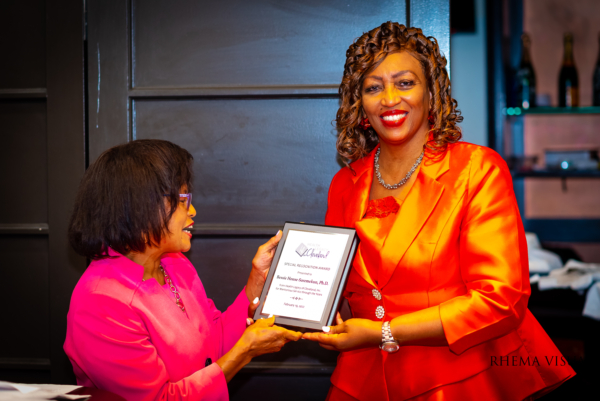 Our last award recipient this evening is none other than our esteemed Health Legacy of Cleveland President and Chair of the Board of Directors, Dr. Bessie House-Soremekun

Her critically acclaimed 7th book, Yoruba Creativity: Cultural Practices of the Modern World, was recently published by Carolina Academic Press. I intend to purchase a copy of the book tonight and books will be available for those who wish to acquire a copy.

Other Award Recipients who are unable to be here with us tonight, will be presented their awards at later date…

Health Legacy of Cleveland Inc. would also like to acknowledge Dr. Oscar Saffold as one of the Founding Members of HLC and Cynthia Clark MA as Immediate Past Executive Director of HLC.