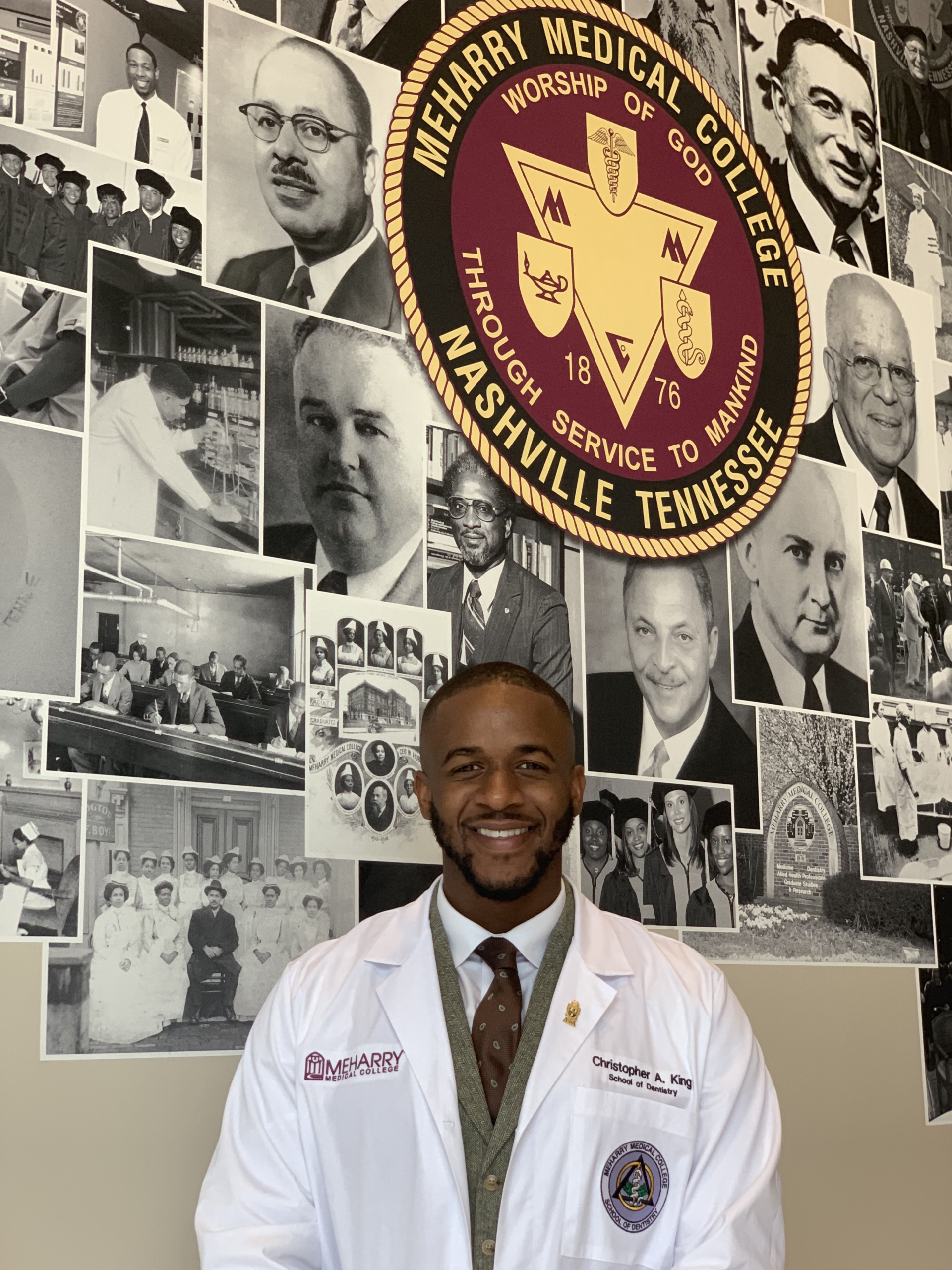 Christopher King is a native of the Hough neighborhood of Cleveland, Ohio. Christopher is a product of the Cleveland Metropolitan School District, being a graduate of Whitney Young and the School of Science and Medicine at John Hay. After graduating high school, Christopher matriculated to Morehouse College in Atlanta, Georgia. At Morehouse, Christopher majored in Biology and started his journey to Dentistry. During his freshman year Christopher participated in the Summer Medical and Dental Education Program at the University of California- Los Angeles. During this program Chris learned how Public Health and Dentistry intertwine and how a Dentist can maximize their reach to underrepresented populations that need care.  Upon returning to Morehouse, Christopher solidified his career choice and joined the Executive Boards of the Health Careers Society, Atlanta University Center Public Health Institute, and participated in other experiences to grow in leadership and to give back to the community through service projects. While building his experiences and resume, Christopher graduated from Morehouse College in 2016 with Cum Laude honors, but still did not feel ready to apply to Dental School.

Frustrated and confused, Christopher decided to explore the options of Graduate Schools that would strengthen his application to Dental School.  Christopher decided to attend the Masters of Health Science program at Meharry Medical College.  He performed well, and was admitted into the graduating class of 2023 at the Meharry Medical College School of Dentistry.  Since entering Dental School, Christopher has been named to the Dean’s List for academic achievement, received multiple scholarship awards, and served on numerous Executive Boards for organizations. Christopher’s scholarship award from Health Legacy of Cleveland is his most cherished of all. Christopher’s mission is to return to Cleveland and serve his community.  He is very appreciative to be supported both emotionally and financially in this quest. In 2021, Christopher was admitted into the Robert Wood Johnson Health Policy Scholars program at Meharry Medical College where he will learn about Health Policy and Public Health. Christopher is most proud of his role of Co-Chair for the Give Kids A Smile Day of Service with the Department of Pediatrics. Give Kids A Smile is an annual event sponsored by the American Dental Association that was created for schools to bring in children for a day of free treatment, fun and help them establish a dental home.  In his role as Co-Chair, Christopher has been tasked to write grants for funding, secure volunteers, organize media coverage, plan day of logistics, and establish communication with the patients and their families. This event will take place in April 2022 and Christopher is very excited.

Christopher is a member of Alpha Phi Alpha Fraternity, Incorporated by way of the Alpha Alpha Lambda Chapter.  Chris is currently interested in Cosmetic and Pediatric Dentistry and will apply to Residency Programs in Summer 2022. In his free time, Christopher loves to mentor minority Pre-Dental students and motivate them to have resilience and commitment on the road to becoming a Dentist.  Lastly, he enjoys traveling the world, and spending time with loved ones.